This written reflection is the final assessment piece for the Creativity and Ageing course I recently completed with the University of Tasmania. It brings my learning on creativity during the unit together. 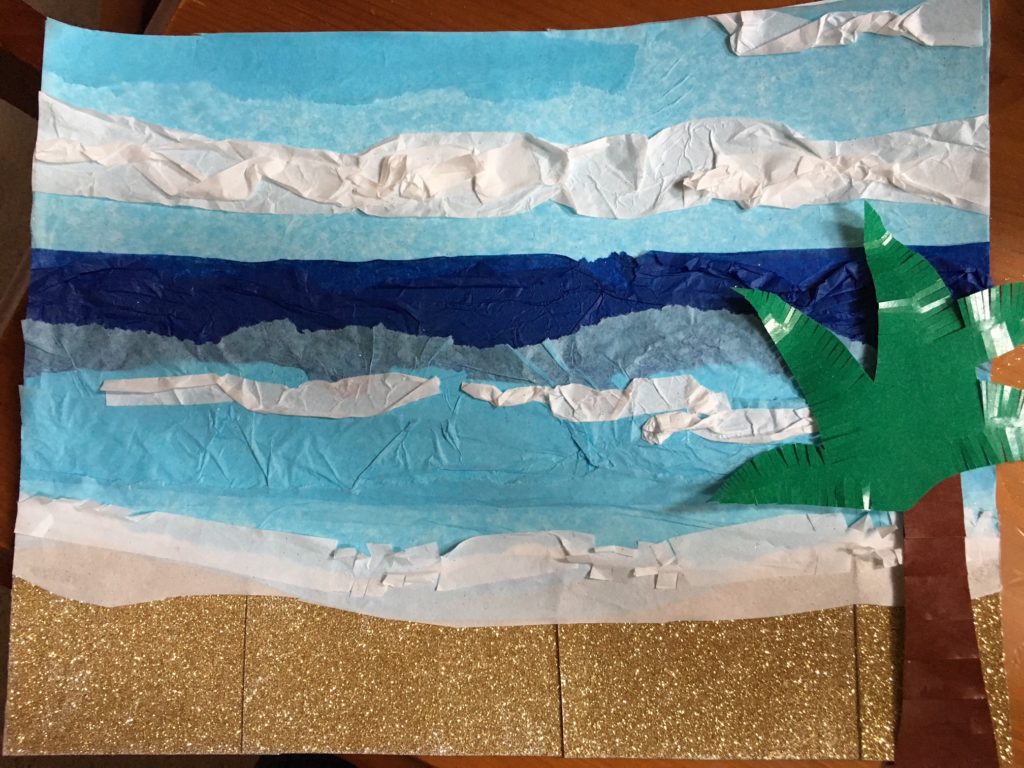 From a young age I have defined myself as a creative person. I am a writer, producing written work in journalistic, book, blog and fictional form, but I also like to draw, craft and bake. Creativity is part of my daily life – both my work and play – however my participation in this unit on Creativity and Ageing has forced me to look at what defines a creative person and, indeed, what creativity actually is.

Bohm (in Gomez 2007) may believe creativity is impossible to define in words, and indeed, the concept of creativity is so vast that it is hard to grasp a singular meaning from the many available. One of the reasons defining creativity proves so difficult is that there are three types: artistic creativity, scientific and technological creativity and hybrid creativity, which is a mix of both the former types (Gomez 2007: 32). These types cover a range of people and personalities, as well as the space between creative ability and creative capacity, and cover a vast range of pursuits from painting and poetry to invention and architecture.

In an effort to break this down from such big-picture thinking I looked at how Meusburger defines what creative people do: develop new and novel ideas or artifacts. In other words, Meusburger says, “Creative people typically address topics that are unnoticed, underrated, or not understood by others” (2009: 99). Over time researchers have concluded that creative people are more interested in meaning and implication than small details, are flexible and curious when it comes to developing their knowledge and understanding of something, communicate well and do not restrict impulses (Gomez 2007: 32). This gives me a better understanding of what a creative person is, and how what I create fits within those definitions, so I will now move on to creativity itself.

In its most simple form, the word “creativity” is derived from the Latin term “creo”, which means, “to bring forth, produce, make, create, beget, give origin to” (Woodell). The key words in this definition are “create” and “make”, which feed into the idea outlined above that creative people produce something new or novel. Of course there are many more definitions of creativity, and how the concept of creativity relates to academic studies within philosophy, psychology, neuroscience, sociology and much more, however this definition is more than sufficient for the purposes of this reflective piece.

Exploring my own creativity

Using the definitions explained above, I consider my involvement in the Creativity and Ageing course draws on hybrid creativity. Through undertaking this online course I have developed both my artistic abilities and my technical and analytical skills to explore the topic of creativity and how it relates to my own life, and those around me. I was called on to explore topics and techniques that both challenged and invigorated me, while feeding my creative muse at the same time. My understanding of the ageing process in relation to creativity, brain plasticity and brain degeneration and regeneration has been extended beyond the knowledge I had from my own experiences and those of family and friends. At the start of this course I was confident in my creative ability and thought this would be a good way to exercise that particular ‘muscle’ while I was not researching for my PhD. However, I was challenged with topics that made me look differently at the world and its inhabitants right from the beginning.

Researching the concept of the human brain and where creativity fits within it resulted in deeper thinking on my part, but also very interesting conversations with those around me as I shared what I was learning. Friends and family members responded with their own understanding on the topics of dementia, brain injury and stroke, mental health, synthaethesia, cognitive thought and much more in between. These conversations led us to conclude the brain is continually developing and our creativity can actually benefit from ageing, illness and alternate thinking as we look at the world differently through different experiences. Again, drawing on Meusburger’s words: “Creativity is not a sudden insight but a lengthy process” (2009: 108), which both speaks to the author’s five stages of creative progression and also a life-long commitment to – and development of – creativity.

My own creative work to fulfil assessment for this course can be explained using Meusburger’s description of the five stages of creativity: preparation, incubation, insight, evaluation and elaboration and verification (2009: 108-9). The idea of directed creativity appealed to me because it forced me to challenge myself and try new techniques, genres and projects that I would not normally consider. Starting with the first activity, I initially chose to respond to the “running water” prompt with creative writing, however a friend’s death led me to consider the “holiday” option instead. While trying to make sense of my grief and struggling with other personal difficulties, I found myself exploring the way people from cultures outside my own familiar western one celebrated the death of loved ones with festivals and holidays. The result was a poem dedicated to June and expressed visually through paper craft – both creative activities I had dabbled in previously but was not confident in. 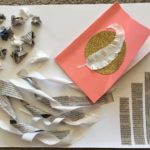 For my second activity I chose collage, which was something I had not experimented with since primary school! My initial paper-only collage was a beautiful, peaceful beach setting, but I could not make this image work once I needed to produce a second collage so I went back to the drawing board. Instead, I produced two collages exploring the creative aspect of myself: a writer at work. While I enjoyed this creative process immensely, I was unsure of how to take the ideas in my head and express them visually using paper and found objects because it was far from my comfort zone of writing. 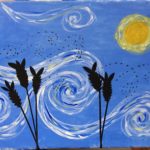 Finally, my third creative activity was to produce a herbarium. I started confidently collecting blooms from my back garden and pressing these, but was surprised when my desire to respond creatively was through painting, again something I had not done since a child. Unsure of the result, I allowed myself to stop thinking about the activity and work with the ideas that came into my mind. These ideas revolved around the weather on the afternoon I collected my floral samples, the colours of the summer afternoon and one of my favourite Van Gogh paintings: Starry Night. The end result pleasantly surprised me.

Undertaking three such different creative activities has forced me to review my own creative process, loosen the thinking that I usually undertake before starting anything and has challenged my ideas about my own creative abilities. I’ve realised I’m more a hybrid creator than I first thought, as I consider how I want the piece to look, feel or read before starting any creative project, instead of just diving in. Suler explains that there are myriad kinds of creative thinking, rather than one all-embracing way to be creative (1980: 161). He says: “…creative thinking is, for some people, a stable characteristic across situations, but that for others creativity is a sporadic or situation-specific phenomenon,” which fits within my own experiences when it comes to creativity. My thoughts about creative pursuits vary depending on the situation, with whichever trait is needed for the task at hand – originality, inspiration, invention, resourcefulness or innovation – coming to the fore as needed.

Woodell, K. A. Definition of creo. Retrieved from http://latinlexicon.org/definition.php?p1=1003767